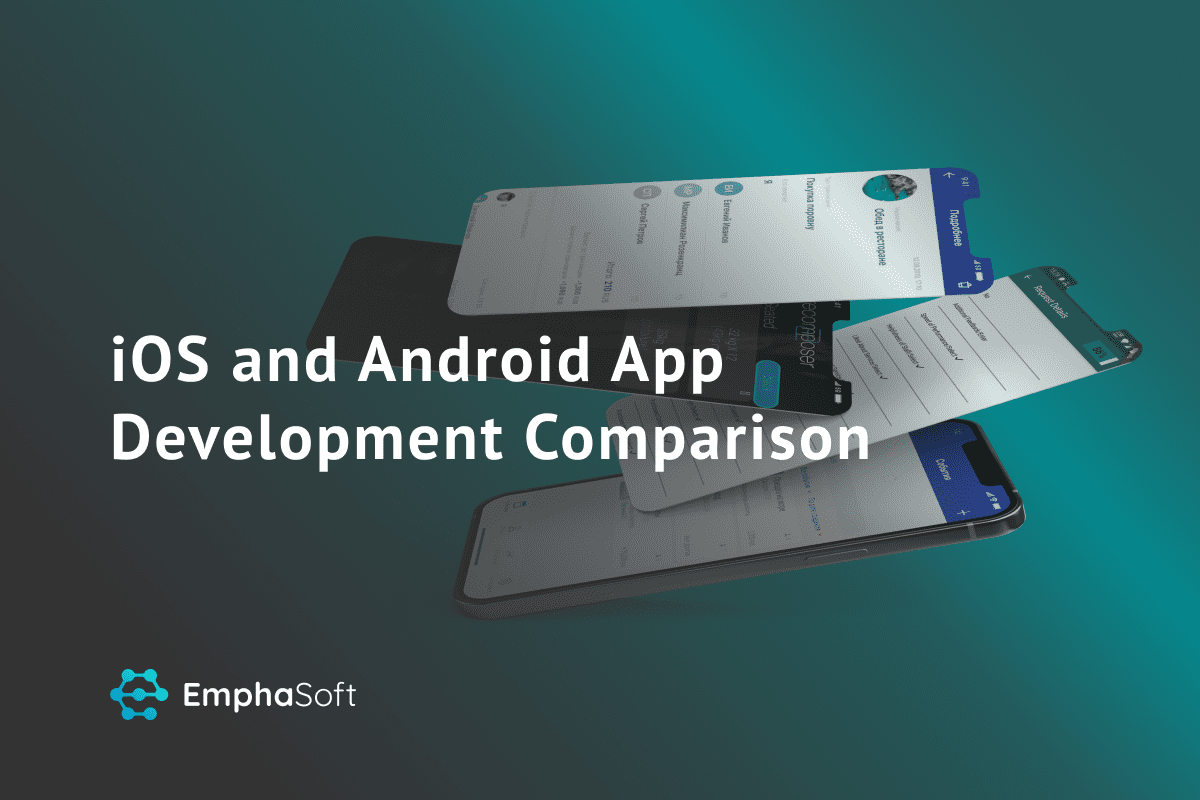 Mobile app development has been steadily growing in proportion to the increasing number of smartphone users worldwide. The last couple of years, however, have been exceptionally hectic as the pandemic pushed everyone to switch to an online format, with new services emerging and existing ones getting a boost. Education and telehealth alone have contributed greatly to the increase in mobile app development.

In this article, we will do an Android vs iOS development comparison and highlight the main benefits and downsides of both platforms to help you make the right choice for your company.

Let’s look at the main benefits of mobile app development for Android.

Perhaps the main difference between iOS and Android is flexibility. First, Android allows developers much more freedom as there are few issues with hardware compatibility and the list of requirements is less demanding. Second, Android relies on Java - a versatile programming language that supports all major operating systems, making it, once again, less of a challenge for developers to build apps.

It is true that Google’s approval process has become a bit more time-consuming than it used to be (in the past, approval was automated and took a few hours, now it can be up to a week for first-time developers). However, it is still rather easy to publish an app with Android. The developer’s approval rate is high and the registration fee is very affordable, 25 USD (versus 99 USD with AppStore).

Google has done a great job of creating and maintaining extensive knowledge bases and content to help train Android developers and broaden their expertise. If you are creating a mobile app on Android and come across an issue, there is likely to be an answer to your question somewhere on the internet.

Android is by no means perfect. Here are some of the main drawbacks you’ll have to face when developing a mobile app on this platform.

Android goes beyond mobile phones, so when developers work on an app, it should be compatible with an ecosystem of devices. While it is a great opportunity to reach all user devices and broaden the popularity of your apps, it also represents a great challenge when it comes to testing. With many devices to cater to, minor bugs become easy to overlook, making user experience slightly worse and forcing developers to release bug fixes almost constantly.

iOS is a top mobile app development platform that is extremely popular with both end-users and developers. Here are the main pros of building apps on iOS.

Mobile apps on iOS follow strict and detailed design guidelines by Apple. As a result, all apps on iOS have a sleek and flawless look that users enjoy.

Fewer devices to adjust for

Apple releases a wide range of products, but it is still significantly less than Android alternatives. Mobile developers creating apps for iOS can do it much quicker thanks to the limited number of different screen dimensions to consider.

Besides issuing a list of technical requirements that developers need to follow, iOS mobile app development requires software, such as XCode, that only runs on Mac. For the development team, it means that they need to have at least one piece of Apple technology to create an app.

Unlike Android, iOS mobile app publishing is very rigid. Even developers who follow all the rules and guidelines can be rejected if the platform deems their application not useful or relevant enough. This adds additional risk to the project and can result in additional costs to the team.

Now that we went through the main pros and cons of app development for iOS and Android, let’s look at additional factors that can influence your choice of developing for Android vs iOS.

According to Statista, Android and iOS have a combined market share of 98% of the global market of operating systems. Between the two, iOS had roughly 22% in 2019, and Android is an undeniable leader with the current 74% market share of the global mobile operating system market. In the US alone, about a third of all devices have iOS installed and about a quarter have Android.

While Android is a leader in terms of market share, iOS users tend to spend more money on in-app purchases and subscribe to services, boosting the company's recurring revenue.

In terms of locations, the iOS platform makes more sense for apps with users in the USA, Japan, and European countries. Android is more widespread in some countries of Latin America and Africa.

While both Android and iOS users come from very different backgrounds and represent all demographics, there are data points you can’t deny.

According to Forbes, iPhone users, on average, have a higher level of education, have higher household incomes, and choose to work in business and sales. Android users, in turn, have lower average household income but still have sufficient means. They are more likely to work in tech or medical fields too.

iOS uses Swift, a native Apple programming language for mobile app development. Android uses Java. Java supports all major operating systems, so it’s rather universal. Swift tends to be more convenient because it is specifically tailored to the needs and demands of iOS developers.

iOS mobile apps are much more standardised because of extensive guidelines. This can be seen as a threat to custom and unique features or tools that developers want to implement. On the other side, knowing your limits and having guidelines makes the development process much more straightforward and predictable.

In terms of post-release maintenance, Android users tend to stick with older versions of the platform. That leads to them experiencing more issues with security and bugs, as well as crashes when they download and use newer apps. For developers, it means that they have to keep older Android versions in mind or risk releasing an app that some users would not be able to enjoy. iOS developers suffer from this issue to a much lesser extent, making post-release maintenance much cheaper and easier.

iOS vs Android development: what to choose and where to start?

The platform choice ultimately comes down to your target audience, budget, and preference. If you see that primary users lean towards one platform or the other, you might be better off starting with one. It will be easier and take less time. You will be able to create an MVP and test with users on one platform before expanding onto the other one.

Developing for ios and android simultaneously can be tricky but it allows you to cover the majority of the market and attract more users. Professional mobile development companies, such as Emphasoft, can help you identify the best platform for your needs and help execute your vision to the highest standard. Our iOS and Android app developers have vast experience in and passion for mobile apps and will be happy to create unique applications to help achieve your business goals.