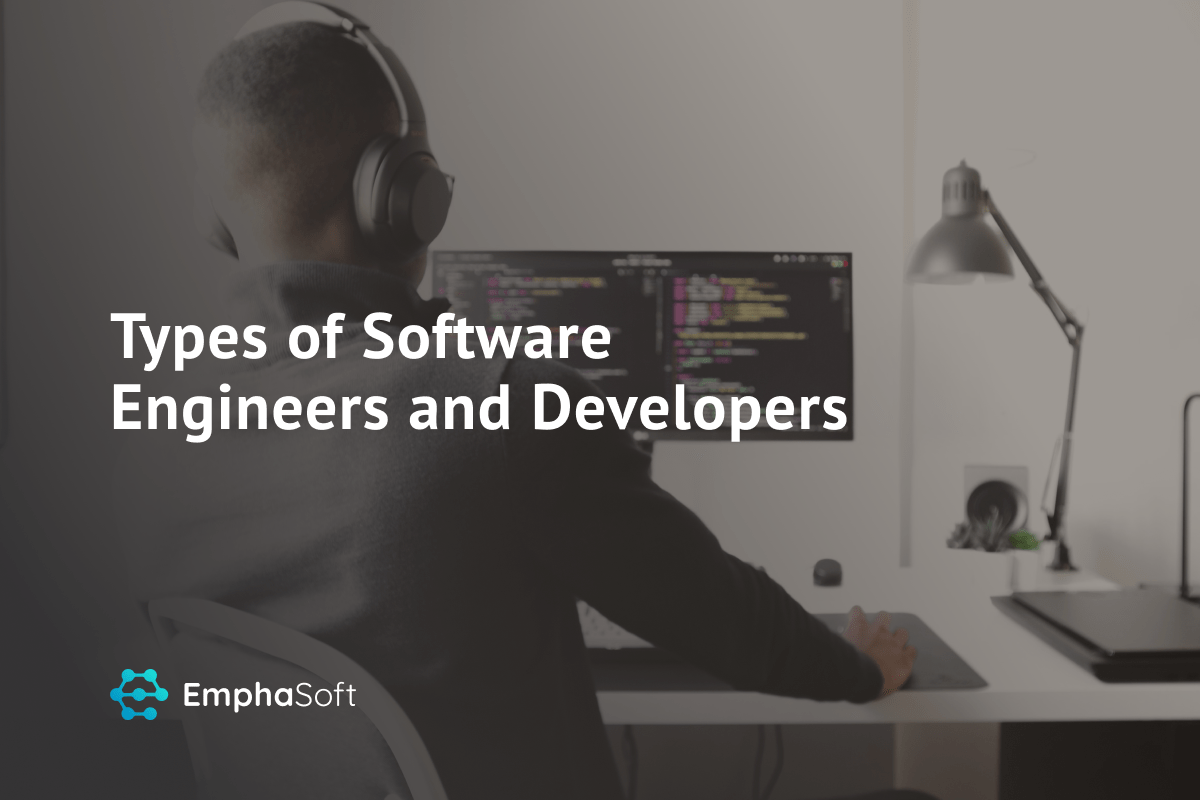 Types of Software Engineers and Developers

In today’s article, we will shine the light on the difference between the two and talk more about the different types of software developers and software engineers found in the workplace.

What is a software engineer?

Software engineers typically work with problems that must be solved within a timeframe, a budget, and produce a high-quality outcome. They apply engineering principles and concepts to create and enhance computer programs.

Software engineers are often required to communicate with stakeholders and take responsibility for the entire development cycle. This means they need to have the skills of a developer, tester, support engineer, project manager, in addition to other specialists.

What is the difference between a software engineer and a software developer?

We will do our best to describe the difference between the two terms, although they are often used interchangeably, which can be confusing.

A software engineer looks at the big picture and is more focused on solving the issues. Their job is to make the existing solutions work well, as a standalone solution or within the existing infrastructure. Engineers partner with clients to understand the clients’ needs and adapt accordingly.

Software developers create a solution from scratch and tend to be more independent in their work process. They often have a more narrow focus on the solutions they develop.

One might say software engineers are problem solvers on a global scale, and software developers are typically working with one piece of the puzzle. In other words, engineers are looking for a root cause issue to solve the long-term implications of the problem, but developers deal with short-term consequences.

Both roles tend to work with the same technology, such as Java, but focus on different aspects. However, software engineers are generally familiar with multiple multiple programming languages and tools, but developers are typically specialists in one area or with one tool.

Although it may differ depending on the market or industry, software engineers are usually expected to have a formal university degree. In contrast, software developers can be self-taught, and it is accepted as the norm.

1. Front-End Engineer works on the user interface of the solution. They create layouts and aesthetics, making the software convenient and easy to use.

2. Back-End Engineer works with the inner logic of the solution, its scalability, and integration capabilities.

3. Full Stack Engineer takes care of both the interface and the software's back-end. They have the combined skills of Front-End and Back-End engineers and can create a fully functioning solution by themselves.

4. Quality Assurance (or QA) Engineer makes sure a solution is working as it’s supposed to by running tests and using different evaluation methods.

6. Security Engineer is similar to a QA engineer, but focuses on testing and strengthening a system’s security. They find the flaws in the software by using various methods and procedures. Once the weak points are identified, their job is to address the vulnerabilities and eliminate security risks.

A software developer’s main goal is to create software, ranging from minor tools and phone apps to enterprise-level solutions. Software developers can be involved in the full cycle of product development, where they research client needs, code, test for bugs, and write documentation afterwards. The software developer job types we most often encounter are those specializing in one area of development and not the entire project.

It is difficult to classify software developers as we did with software engineer categories. Developers are often narrow-focused, and their various titles could create an endless list. For example, you can meet Python developers who specialize in Python. There are also hyper-specific examples such as Front-End and Back-end Java developers.

There is a hierarchy among developers based on their experience and skills:

Lead developers have more in common with some types of software engineering jobs because they also oversee the entire process and work on strategic aspects.

Software engineers and software developers overlap a lot but they are not the same. Furthermore, many tech professionals choose to work beyond their job description and learn new skills. By not limiting themselves to their title, they can remain relevant and stand out in a very competitive industry that changes dramatically every year.

We hope this article helped you distinguish the roles and understand each one better. Whether you are a project manager, a business owner, or an aspiring student, it is essential that you keep those differences in mind when considering the rolesand know exactly what you need and what to look for.